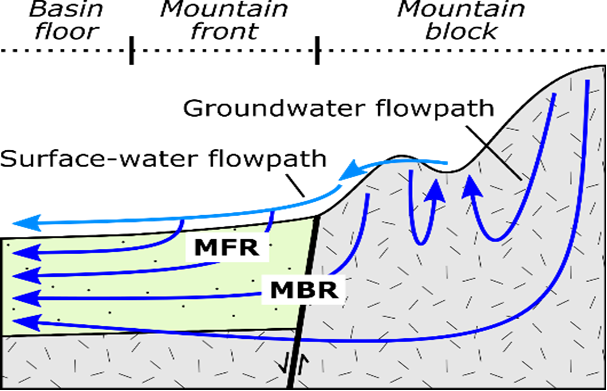 Like numerous basin aquifers in Australia and around the world, the Adelaide Plains aquifers contain water derived from adjacent mountains – the Mount Lofty Ranges in this case. The reason is simple: mountains typically benefit from higher precipitation and lower temperature than basins, leaving more water after evapotranspiration operates. In principle, the water can take two pathways to migrate from mountains to adjacent basin aquifers (Figure 1): firstly, overland flow over the mountain followed by focused infiltration along streams in the upper part of the basin, or mountain-front recharge (MFR); and secondly, diffuse infiltration over the mountain followed by lateral groundwater flow into the basin, or mountain-block recharge (MBR).

The distinction between MFR and MBR is important. These two mechanisms imply quite different flow paths, groundwater age and groundwater quality, therefore greatly affecting the overall conceptualization of the system. Moreover, the two processes also imply different vulnerability to land and water management practices as well as to climate change. However, although conceptually well understood, these two recharge systems remain difficult to distinguish. Yet a good understanding of these mechanisms is essential for an effective management of water resources.

In a recent paper3 published in the journal Hydrology and Earth System Sciences, we presented an approach that uses hydraulic head, chloride and electrical conductivity data to distinguish between MFR and MBR. The relevance of this approach partly lies in that these variables have been routinely measured for decades in the Adelaide region – and surely in many parts of the world; if not, their measurement is inexpensive (provided wells already exist).

The data presented in this research consistently suggest that the Adelaide Plains aquifers are mostly recharged through MFR. This is in contrast with the previous understanding that most of the groundwater would be derived from MBR. The latter idea was introduced in the late 1990s and has been widely adopted since then7,8,11,15,1,6,2. However, some earlier investigations arrived at the same conclusions as we did13,14,10. A thorough review of all previous arguments leaves little doubts on the fact the MFR is indeed the dominant recharge mechanism of the Adelaide Plains aquifers.

This finding has important implications for water management in the Adelaide region. Firstly, groundwater supply may be more limited than previously thought. Indeed, the Mount Lofty Ranges might have been perceived as a large water tower capable of supplying water through the subsurface when pumping in the basin. The fact that this water pathway appears insignificant should change our view on the ability of this system to cope with intensive groundwater extraction. This may partly explain why groundwater levels have dropped so significantly over large areas of the basin since groundwater extraction started, in the early 1900s4. Secondly, this work highlights the importance of streams and creeks to the groundwater system. This implies that water policies should focus on protecting these surface waters, so as to ensure a sufficient runoff of good water quality.

Groundwater resources management can only be effective if robust estimates are available of how much water naturally gets into the system. Hence, future investigations should be carried out to better quantify MFR, as large uncertainties remain on the actual recharge rate through this mechanism. The findings of this study also point towards the need of alternative sources of groundwater recharge if groundwater extraction is to be maintained or increased. Managed aquifer recharge technologies exist and have already been successfully tested in the Adelaide region9,5. This should motivate the development of more research and application of these technologies.

8 Gerges, N. Z. (2006), Overview of the hydrogeology of the Adelaide metropolitan area, DWLBC Report No. 2006/10, Department of Water, Land and Biodiversity Conservation, Government of South Australia.