What really annoys scientists about the state of the climate change debate?

by Graham Readfearn, The Guardian 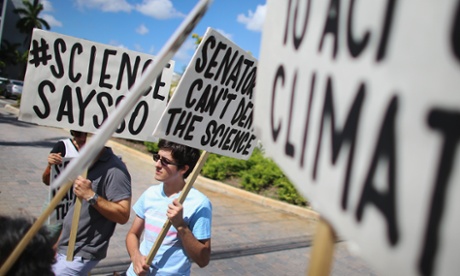 From misinformed politicians who should ‘shut up’, to a failure of large parts of society to grasp reality, climate scientists reveal their bugbears.

“Don’t shoot the messenger,” so the saying goes.

But what if that message warns we might want to rethink that whole fossil fuel burning thing pretty quick because it could seriously alter civilization and the natural world for centuries to come, and not in a good way?

Time to get the bullets out and start firing, obviously.

Climate scientists have been trying to dodge, catch or deflect those bullets for decades.

They are now all too used to being shot at, kicked and maligned as their findings are misunderstood, misrepresented, trivialised or booted around like footballs between politicians and other warring ideological factions and self-interested industry groups.

But if they had to pick one thing, what is it that really gets them annoyed?

When the public tries to understand the implications of their scientific findings – or just understand the findings themselves – what’s the most common mistake they see?

When the media gets hold of their findings, what makes climate scientists chuck a shoe, ice core or physics textbook at the screen in frustration?

I decided to ask a few leading climate scientists from around the globe to articulate that one thing that leaves them totally tacked off.

Some struggled to pick only a single bugbear (one even called to apologise for taking too long, so spoilt for choice were they), others took the chance to uncompromisingly unload their frustrations.

Here’s what they had to say.