When the Indian Ocean and El Niño join forces, things can get hot and dry 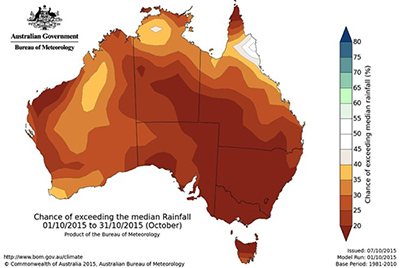 El Niño has always been a key player in Australia’s climate. And as temperatures in the tropical Pacific Ocean show, the current El Niño event is the most significant since 1997.

For many countries in the western equatorial Pacific, most notably our neighbours in Papua New Guinea, El Niño has brought significant drought. On the other side of the ocean, floods and landslides have caused disaster in Peru.

Now we’re also seeing the start of a global coral bleaching event — only the third that has ever been recorded.

But until recently, climate models have been far less firm in their outlooks for Australia. Simulations of rainfall for the coming months have been dry in some models, whereas others have shown average or even wetter-than-average outlooks for parts of Australia — with an inkling of above-average heat.

Notwithstanding long-term drought in parts of Queensland, northern New South Wales and the southeast of Australia, the weather that we have seen since El Niño was declared earlier this yearhas been consistent with a moderate influence on Australia — with patchy rainfall overall, and less rain in the north of Australia and parts of the coastal south.

While that’s not quite the high-impact El Niño we loathe here in Australia, it is consistent with the science.

While very strong La Niña events, such as in 2010–12, almost always bring exceptional rainfall to Australia, our relationship with El Niño is a little less straightforward. Some strong El Niño events have brought only moderately dry conditions to Australia, such as we saw in 1997–98, while some weaker events have caused widespread and severe drought, such as in 2006–07.

Those in the business of managing climate risk were hoping that the models would continue to show a reasonable chance of some rain over spring. Then along came September. The climate turned dry. And hot. And the models agreed — El Niño was set to make its presence felt in Australia.

With fires burning across the southeast during a record-breaking early season heatwave in thefirst week of October, we are keeping a very close eye on Australia’s key climate drivers.

El Niño is not the only influence on Australia’s climate worth talking about. Australia’s rainfall is affected by ENSO (El Niño and La Nina) in a big way — but we also know it’s driven by many other influences.

Some of the Australian climate influences Australian Bureau of Meteorology

These include: the Indian Ocean (tropical and subtropical), the Southern Ocean, the seas directly to our north, the pulses of tropical convection that circle the equator, the position of the subtropical ridge (the big high-pressure system that sits over Australia), the position of cold fronts to our south, the soil moisture (surface and subsurface) over the continent, and climate change. Rainfall is also sensitive to random internal climate variability — the chaos that climatologists call stochastic variability, but most others would simply call chance.

That complexity is why the world’s leading meteorological agencies – including the Australian Bureau of Meteorology — use “dynamical” climate and weather models. These numerical models absorb information from satellites, floating buoys and weather stations and use physics to calculate what may happen in the days, weeks and months ahead. We also use models, combined with observations, to work out what’s happening right now.

While it would have been obvious to those watching that we had a significant El Niño developing – the Bureau made its declaration on May 12 – this time there have been a few other significant players in the climate mix. In fact, the impact of multiple climate drivers on Australia’s rainfall has been observed across the year to date.

The Indian Ocean has been getting hotter. Recent research suggests that a significant fraction of the total ocean heat gain from climate change is finding its way to the Indian Ocean basin, driven by the global ocean circulation. The oceans to the northwest of Australia, a critical region for our rainfall, have been running at hottest-on-record for the past decade, and this record warmth has been almost basin-wide during the past three years.

Consistent with this trend, June, July and August 2015 were all record-warm months for the Indian Ocean, and this, in turn, is having an impact upon the climate, and the models we use to forecast it.

Not only has the warm water been pushing more moisture onto the Australian continent, it has also been altering the position of the jetstream above us. Ultimately, this was affecting our local weather patterns in a way that was countering the ever-stronger El Niño event in the Pacific.

In terms of the impact of El Niño on Australia, the Indian Ocean is crucial. In the tropical Indian Ocean is the “Indian Ocean Dipole”, otherwise known as the IOD. The IOD is the difference in water temperature anomalies between an area off East Africa and an area off Indonesia. Like El Niño in the Pacific, when the heat moves to one side of the ocean basin, so too does the rainfall.

Indian Ocean Dipole moves heat in the ocean, and rainfall, to the east away from Australia Australian Bureau of Meteorology

A “positive IOD” event is the Indian Ocean’s equivalent of El Niño — with warmer waters in the west of the basin associated with increased rainfall over East Africa, and cooler waters in the east associated with drier conditions in Australia and Indonesia. When this positive IOD pattern is combined with El Niño, it strengthens the El Niño influence considerably, particularly in the southeast of Australia.

Winter-spring rainfall average over past years when both El Niño and a positive IOD were present. Australian Bureau of Meteorology

Come September 2015, a positive IOD started to emerge. In the Bureau’s regular ENSO Wrap-Ups and our September climate and water outlook video we noted that this was something we – and everyone managing climate risk – needed to keep an eye on. While models were uncertain how strongly this positive IOD would develop, it was clear that it had the potential to become a serious influence. Ultimately, and indeed rapidly, it strengthened, reaching values not seen since 2006.

As a result, we now have three big players in the 2015 climate: El Niño and the positive IOD — which dry out our climate — and also a record-hot subtropical Indian Ocean — which tends to drive wetter conditions. It is a battle for supremacy of our skies. And the dry conditions are currently winning out – by a fair margin.

Will the dry stay?

Typically, the IOD pattern breaks down every November as the East Asian monsoon kicks in and the easterly wind patterns die off. And this year should be no exception, just as the models are suggesting.

For Australian rainfall, that would return us to a hot Indian Ocean versus hot Pacific Ocean contest as early as mid-November 2015. But will that guarantee more rain? No. It won’t guarantee it, but it may at least up the odds of some summer/northern wet season rainfall. In terms of fires and agriculture, a dry and hot October, on top of a dry September, sets up risks that need to be managed for rest of the year.

The Bureau’s Climate Outlooks and ENSO Wrap-Ups are two tools that might help manage these risks.