Why we need a new model for simulating rainfall 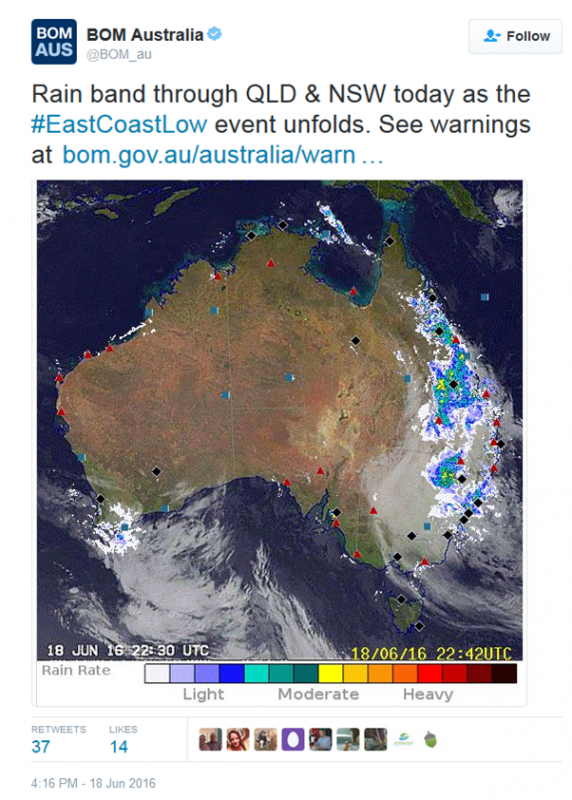 Rainfall predictions are extremely important to estimating flood risk. This month, news headlines have repeatedly reported floods and wild weather. June has seen the east coast of mainland Australia and Tasmania hit by storms causing significant flood damage. At the time of writing, flood warnings are in place for NSW. Flooding is not a passing topical event. The risk of flooding represents an ongoing challenge for Australia. Many groups from government bodies to insurers require good estimates of flood risk over regions.

Development in Australia has typically occurred near rivers and on their flood plains. Development next to significant watercourses can present a significant flood risk. It makes flooding Australia’s most costly natural disaster type. For example, the 2007 Pasha Bulker storm caused $1.5 billion in storm damage. The 2011 Queensland floods produced $6 billion in flood damage. The Queensland flood  totalled $30 billion in insurance claims and revenue losses in the mining, agricultural and tourism sectors.

Obtaining reliable estimates of rainfall is critical to estimating flood risk, but there are a number of challenges.

The recent widespread rainfall events have mostly been the result of East Coast Lows. A noticeable feature of these events is their widespread coverage (see image below).

At the catchment scale, the spatial distribution of rainfall is an important consideration for obtaining reliable estimates of floods. It can have a significant impact on flow magnitudes, peak timing and behaviour.

Unfortunately, typical design practice does not sufficiently account for the spatial nature of rainfall events. Instead, it relies on rainfall estimates at a ‘representative’ point, which are then assumed to be constant over a catchment. There is much room for improvement here.

The challenge of improving the spatial representation of rainfall is further compounded by the sparsity of rainfall data in space and time.

For example, point rainfall gauges can have long records, but they provide limited information on rainfall in space.  Radar observations provide spatial information, but the records are relatively short. Some datasets infill the space between observed-point rainfall measurements using interpolation. But, there are difficulties with interpolating durations of less than a day.

One way of dealing with this lack of data is to use computer models to generate spatial rainfall sequences.

Another challenge for obtaining reliable flood risk estimates is dealing with uncertainty.

The historical record of rainfall only provides one example of the climate. This may seem reasonable, but given the highly variable nature of the weather, it is insufficient for the reliable estimation of impacts. This is particularly true for rare events such as large floods.

For this reason, models of spatial rainfall are needed. They should be capable of providing many possibilities of rainfall sequences, each of which is equally likely to occur. Often it is necessary to consider thousands of hypothetical sequences to reliably estimate uncertainty. Thus, to be of practical use the computer programs for generating synthetic rainfall should be relatively quick.

A further challenge in dealing with flood risk in space is the coincidence of events. Hydrologists refer to this as ‘joint probability’.

For example, a wet catchment coinciding with a large storm will produce a different size flow than a dry one coinciding with the same storm. So, consideration of the joint probability of such events is essential for accurate flood risk estimation.

One way of accounting for the joint probability is to use continuous simulation.

Continuous simulation attempts to account for all possible joint probability combinations. It simulates the wetting and drying of a catchment using long-term rainfall sequences. This results in the generation of long records of flow. As this approach is computationally intensive, it needs flexible and fast rainfall models. To date, most spatial rainfall models have either focused on the simulation of individual events or have been too complex to allow the simulation of long-term spatial rainfall sequences.

Spatial rainfall must be able to represent the wide range of potential rainfall events. And they must be capable of adequately representing future events.

With the potential for change in the magnitude and spatial distribution of rainfall, (see prior blog post Sizing up extreme storms in a future climate) simulation frameworks must be flexible and thus capable of adaption. This poses a significant challenge for the development of spatial rainfall models.

To help address the five challenges above, members of this research group have developed a spatial rainfall model. The new model can simulate long sequences of rainfall and produce many realisations of daily spatial rainfall fields. The model is parsimonious, and it is flexible, making it suitable for continuous simulation.

The Onkaparinga catchment (about 25 km south of Adelaide) has been used to show the new spatial daily rainfall model. Model performance has been tested across a range of time and spatial scales. The model performs well in simulating a wide range of rainfall characteristics. These include rainfall amounts, the number of wet days, the spatial wet-dry pattern, and extremes.

A short animation of the simulated daily rainfall fields is shown below.

The ability of spatial rainfall models like this to address the challenges above is very promising. Further development of these models should be encouraged as a practical step towards better estimates of flood risk.

You can watch a presentation about the new spatial rainfall model here and read the journal paper here.