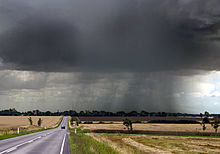 On the occasion of World Meteorological Day 2019, ECMWF Director of Research Andy Brown looks at how the theme of the Sun, the Earth and the Weather ties in with the Centre’s Earth system approach to numerical weather prediction.

Differential heating between the tropics and the poles (due to the Sun being higher in the sky in the tropics) is the fundamental driver of the large-scale circulation of the atmosphere. However, many other factors modulate how the atmosphere reacts to the Sun’s heating. For example, different surfaces absorb or reflect the Sun’s radiation to different extents, with snow and ice having a high albedo and reflecting back to space a high proportion of the incoming sunlight, while oceans and forests present a much darker surface and absorb more of the energy. Clouds and aerosols also affect how much sunlight reaches the surface – affecting the temperature and the amount of water which is evaporated – which in turn can affect the further development of clouds and weather systems.

The inter-connectedness of these processes is the reason why numerical weather prediction is increasingly taking an Earth system approach, incorporating an increasing range of processes. For example, since June 2018, all the ECMWF forecast systems – from medium-range to seasonal – have included ocean and sea ice coupling, allowing a fuller representation of the interactions and hence better forecasts.

In particular, the coupling to the ocean was found to significantly improve the accuracy of medium-range forecasts in the tropics, including predictions of tropical cyclones. We have also seen benefits from enhancing the representation of the interaction of the Sun’s radiation with aerosols, by introducing more accurate fields of aerosols produced at ECMWF as part of the Copernicus Atmosphere Monitoring Service.

Looking ahead, the prospects are good for further improvements. In collaboration with partners around the globe, we are working on further improvements to the representation of many aspects of atmospheric physics – including clouds, convection, radiation and composition (ozone and aerosols). We are working on the land surface, including more advanced representations of snow and ice – and getting great value from engagement with the WMO Year of Polar Prediction.

And of course, developments in data assimilation techniques and the use of observations, in-situ and satellite, have been huge contributors to the dramatic progress within numerical weather prediction in the past decades and will continue to be so. In the context of the Earth system approach, coupled data assimilation presents an exciting challenge and opportunity for the coming years, and the WMO-facilitated exchange of an increasing range of observations will remain critical.

Weather is having more and more of an impact on society. Where we build, how we organise transport, and how we produce energy are but a few of the areas strongly affected by weather. This is making weather prediction more of a critical science than it has ever been. With the Earth system approach, which is proving to be the way forward for our science, sharing the widest possible range of observations must remain a priority on political and scientific agendas.

The WMO has been a great coordinator and at times referee in this growing field and must continue to play this role for the sake of scientific advances which will help us all to protect life and property.

On this World Meteorological Day, we offer the WMO the appreciation of a grateful organisation.