2015 likely hottest year on record for the globe 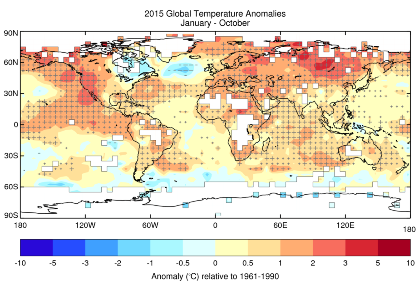 This year is likely to be the world’s warmest year on record—probably by a substantial margin—according to theWorld Meteorological Organization’s preliminary global annual climate assessment.

The assessment, released on 25 November, reported what has become increasingly apparent over the last few months. As of the end of October, temperatures for 2015 are running 0.73 °C above the 1961–1990 average, 0.12 °C ahead of the previous record, set last year.

For Australia, January to October 2015 was the equal-sixth warmest such period on record (with the national record beginning in 1910), with warmth particularly notable across western and northern Australia. Spring rainfall was below average across much of the country, while early-season records and a significant spring heatwave also occurred, with an increase in bushfire risk in the southeast. Global temperatures in 2015 have been strongly influenced by prolonged warmth in the Pacific Ocean associated with a very strong El Niño event. Historically, El Niño’s influence on global temperatures does not begin until about September, and 2015 appears to be following that pattern. Temperatures in October jumped from their already very high values—in terms of degrees above average, October was the warmest month on record in most datasets.

The global mean temperature for the five-year period 2011–2015 is also very likely to set a new record. The World Meteorological Organization reported that the warmth of 2014 and 2015 contributed to 2011–15 being the world’s warmest five-year period on record.

The 2011–15 period has seen significant long-term droughts in several parts of the world. Since 2012, persistent drought has affected large parts of Brazil, the western United States (especially California) and parts of eastern Australia, and the last two years have been very dry in southern Africa. More recently, the second half of 2015 has seen dry conditions develop in a number of areas typically affected by El Niño—with a relatively dry monsoon season in India, and being very dry since mid-year in much of Indonesia and the western Pacific islands, Central America and the Caribbean.

On the other side of the coin, severe weather and floods made their presence felt during the 2011–15 period. Three tropical cyclones in the Philippines each caused more than 1000 deaths, including typhoon Haiyan in November 2013. Hurricane Sandy, in October 2012, was one of the most costly natural disasters on record, with estimated losses of US$67 billion. In 2011, floods in southeast Asia, especially Thailand, led to over 800 deaths and losses of US$45 billion.

The Bureau of Meteorology had a close involvement in both the annual and five-year assessments.

Check out the WMO preliminary assessments now or final publications incorporating data for 2015 will be released next year.