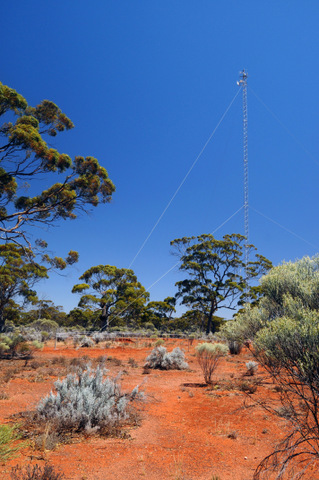 As Australia swelters through another hot summer, a team of researchers is using TERN data to assess how heat waves affect the energy balance, carbon uptake, water use, and overall health of Australia’s ecosystems.

2017 has kicked off with severe heat waves throughout Australia’s southern and eastern states and it seems there’s more hot weather on its way. We know heat waves can pose risks to our power supply, public transport, and personal health, but how do our ecosystems respond?

Thanks to TERN’s flux monitoring infrastructure, data now exist to enable researchers to investigate the impact that heat waves have on Australian ecosystems. This work is especially important to help us plan for a future that is likely to include more frequent and extreme heat wave conditions.

To see what happens to ecosystems during heat waves, researchers have used the data captured by several TERN flux towers during the ‘Angry Summer of 2012/2013’.

The study across southern Australia combined data on carbon and water exchange (or fluxes) between the land and atmosphere with results from CSIRO’s BIOS2 model to investigate the effect of the 2012/’13 heat wave on six woodlands and one forest known for their resilience toward hot and dry conditions.

Ecosystems can switch from carbon sink to source

Dr Eva van Gorsel of the Australian National University and Dr James Cleverly of the University of Technology Sydney are part of the investigative team, whose work has just been published in the journal Biogeosciences.

“The heat wave caused increased respiration in all ecosystems, and carbon uptake was reduced so much at woodland sites that they switched into carbon sources,” says Eva. “Unlike the woodland ecosystems that were severely impacted by the heat wave, the forest site kept sequestering carbon during this short-term heat extreme.”

“But, what we also found is that the heat wave depleted the available soil water at the forest site, leaving the ecosystem highly vulnerable to heat events of higher intensity or longer duration,” adds James.

The research team, made up of 20 Australian and international researchers, also investigated the impact intermittent rain has on the recovery of ecosystems following heat waves.

The team reported in their paper that “The response of the woodlands is the first direct evidence that the carbon sinks of large areas of Australia may not be sustainable in a future climate with an increased number, intensity and duration of heat waves.”

Australian heat waves unlike those overseas

Project researcher Dr. Sebastian Wolf of the Swiss Federal Institute of Technology in Zurich (ETH Zurich) says that there is a fundamental difference in this Australian heat wave to what has previously been observed in Europe and US.

“Heat waves in Europe and California have been shown to result in surplus energy (from reduced cloud coverage) that, in combination with drying, leads to a feedback loop that further increases surface temperatures.”

“But, in contrast to these other studies, incoming radiation and available energy were largely unaffected by the 2013 heat wave in Australia. The heating feedback in the woodlands was driven by drying and thus shifts of the available energy towards sensible heat, thereby warming the surface even further. In the forest ecosystem this feedback was not observed.”

This study highlights the important ecosystem services Australia’s woodlands and forests provide—particularly considering the increased prevalence of droughts and temperature extremes projected in the future—and is another example of how TERN’s infrastructure is continuing to catalyse advances in our knowledge of the land-atmosphere exchange of carbon and water across a range of ecosystems.

By accumulating more data about ecosystem processes, uniquely captured via TERN’s flux towers, researchers can contribute to improve our understanding of ecosystem functioning.

A better understanding of ecosystem processes is critical for further development of predictive models which are needed to predict the impacts extreme climatic events will have on Australia’s ecosystems and their services into the future.