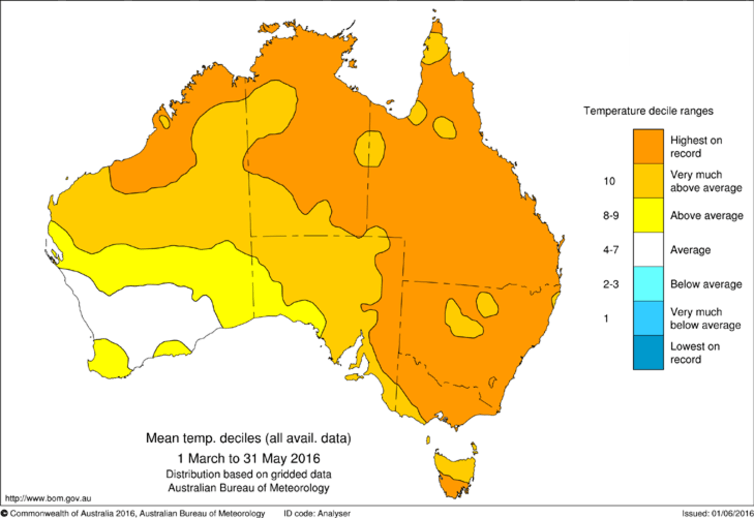 It’s the same old story: with 2016 on track to become the hottest year on record globally, and record-breaking heat already evident around the world, Australia has just experienced its hottest autumn on record.

The Bureau of Meteorology has reported that for average temperatures across Australia, this has been the hottest March-May period ever recorded – beating the previous record, set in 2005, by more than 0.2℃.

Within this period, March was also the hottest on record, while April and May were each the second-warmest in a series extending back to 1910.

El Niño events tend to cause warmer weather across the east and north of Australia and the major El Niño of 2015-16 undoubtedly contributed to the extreme temperatures experienced across these areas.

However, climate change also played a significant role in our warmest autumn. Previous work, led by ANU climatologist Sophie Lewis, indicates that the human influence on the climate has made a record-breakingly hot autumn roughly 20 times more likely.

In other words, without climate change we would be much less likely to experience autumns as warm as this one has been in Australia.

In the past few months, Australia has seen many extreme hot weather events. Melbourne experienced its warmest March night on record, while Sydney had a run of 39 days with daytime highs above 26℃, as the summer heat continued long into March.

But it’s the coral bleaching event on the Great Barrier Reef that will likely linger in our memories the longest. Some 93% of the reef was found to be affected by bleaching and recent surveys have revealed that more than one-third of coral in the northern and central parts of the reef have died.

Without climate change, a bleaching event like this would be virtually impossible.

The extreme heat over Australia this autumn and the associated damage to the reef are also having an effect on the election campaign. As public concern over the future of the reef grows, the parties are being asked to defend their climate change policies.

Both major parties have made election commitments to the reef, with the Coalition announcing an extra A$6 million to tackle crown-of-thorns starfish (adding to a further A$171 million committed under the 2016 budget), and Labor an extra A$377 million over five years (A$500 million in total). While both Labor and the Coalition aim to improve water quality in the reef through their policies, the coral bleaching and death this year is linked with warm seas.

Whether we’ll be able to save parts of the reef largely depends on whether we reduce our greenhouse gas emissions and manage to prevent the rising trend in temperatures from continuing.