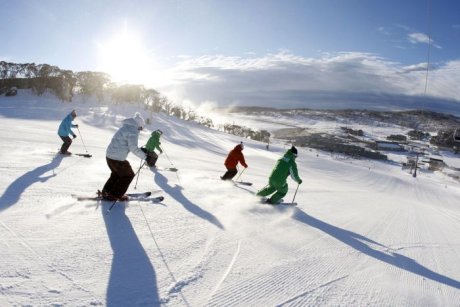 Australia’s ski season could shrink by up to 80 days a year by 2050 under worst-case predictions for climate change — but there are no plans to restrict ski resorts in national parks.

The CSIRO’s climate change modelling predicts, under a low-risk scenario, the average snow season across Victoria and some of New South Wales will become 20 to 55 days shorter and, under a worst-case scenario, 30 to 80 days shorter — all but obliterating the 112-day ski season.

The CSIRO has found significant decline in the past 60 years in the southern slopes and Murray-Basin areas and current predictions are for continued decline in snow depth and duration of snow cover.

However, it also notes snow dumps vary season to season and can be unpredictable.

“Snowfall is projected to experience a reduction that increases with time, with the magnitude dependent on the emission scenarios and the altitude,” its 2015 report predicted.

Kosciuszko ski resorts ‘should be phased out’

Despite that, there is a standing concept plan approval for an 800-bed resort at Perisher.

The Colong Foundation for Wilderness’s Keith Muir said he was concerned it could become a “stranded asset”.

His organisation was considering a legal challenge against the proposed development inside the national park.

The foundation argues it should be reconsidered in the context of climate change and resorts are better placed in nearby Jindabyne.

“We think the ski resorts in Kosciuszko should be phased out by 2030, when there will be no snow that’s viable for the commercial operation of snow resorts, even with snow making,” Mr Muir said.

“We say the resorts will not have a moral licence to operate when the snow is gone, because that’s why they’re there.

“It really is going to end.”

It comes as the NSW Government considers two key reports on the future of Kosciuszko National Park, including a review of bed limits as a measure of impact and potential head lease for Perisher.

The impact of your Kosciuszko trip

Is your getaway damaging the environment? For every new development built for visitors, part of the park is sacrificed.

“If we continue to increase greenhouse gas house emissions at the current rate there will be a relatively rapid decline in snow cover and snow duration,” he said.

“We are looking at a committed warming of at least one or two degrees over the next decade so an amount of change is unavoidable.

“But beyond about the 2030s, it does depend on how our greenhouse gas house emissions are managed.”

Mr Hennessy said higher ski resorts such as Perisher would stay open longer, but would not be immune to reductions in snow falls.

“In the Kosciuszko region, which has fairly high elevation, we expect there to be good years and bad years right through this century and not until the end of this century might we see really, really low snow levels.”

But Mr Hennessy said snow making would become very difficult by 2030, because it would be too warm.

“To make snow you require wet bulb temperature below minus 1 or minus 2 degrees Celsius,” he said.

“The ski industries both in Victoria and New South Wales are factoring in climate change into their projections. The question is how long is that financially viable?”

National Parks and Wildlife Service acting deputy chief executive Robert Quirk said the organisation was focused on making use of the existing infrastructure in the park to draw people year-round.

“We are going to see less snow,” Mr Quirk said.

“We have been seeing that for 20 years, and there is a little bit of an interest in how the business runs through the whole calendar year, not just for four months of the year.

“We do want people to get out and understand environmental values, they’re not going to get that in their lounge room.”

He said the organisation was cognisant of climate change.

“We talk to the resorts about it all the time and we’re watching and waiting to see how it shapes up over the next 50 years,” he said.

“The practical reality is we have a lot of businesses based there now which are focused on the snow still falling, and our principal responsibility is to make sure that we manage those sites for the benefit of the park and the community.”

Vail Resorts did not respond to questions put to it about the impact of climate change in the park, but said it was committed to preserving the natural environments in which it operated.