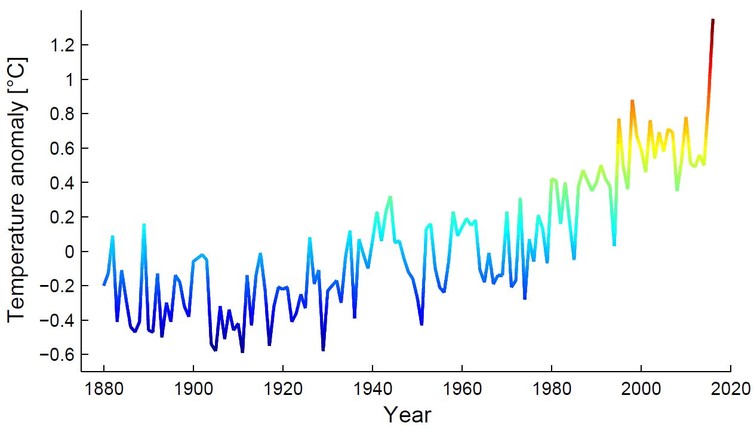 Global temperatures for February showed a disturbing and unprecedented upward spike. It was 1.35℃ warmer than the average February during the usual baseline period of 1951-1980, according to NASA data.

This is the largest warm anomaly of any month since records began in 1880. It far exceeds the records set in 2014 and again in 2015 (the first year when the 1℃ mark was breached).

In the same month, Arctic sea ice cover reached its lowest February value ever recorded. And last year carbon dioxide concentration in our atmosphere increased by more than 3 parts per million, another record.

What is going on? Are we facing a climate emergency?

Two things are combining to produce the record warmth: the well-known global warming trend caused by our greenhouse gas emissions, and an El Niño in the tropical Pacific.

The record shows that global surface warming has always been overlaid by natural climate variability. The biggest single cause of this variability is the natural cycle between El Niño and La Niña conditions. The El Niño in 1998 was a record-breaker, but now we have one that looks even bigger by some measures.

The pattern of warmth in February shows typical signatures of both long-term global warming and El Niño. The latter is very evident in the tropics.

Further north, the pattern looks similar to other Februaries since the year 2000: particularly strong warming in the Arctic, Alaska, Canada and the northern Eurasian continent. Another notable feature is a cold blob in the northern Atlantic, which has been attributed to a slowdown in the Gulf Stream.

The February warming spike brought us at least 1.6℃ above pre-industrial global average temperatures. This means that, for the first time, we have passed the 1.5℃ international aspirational goal agreed in December in Paris. We are coming uncomfortably close to 2℃.

Fortunately, this is temporary: the El Niño is beginning to subside.

Unfortunately, we have done little about the underlying warming. If unchecked, this will cause these breaches to happen more and more often, with a greater than 2℃ breach perhaps only a couple of decades away.

The greenhouse gases slowly heating the Earth are still increasing in concentration. The 12-month average surpassed 400 parts per million roughly a year ago – the highest level for at least a million years. The average rose even faster in 2015 than previous years (probably also due to the El Niño, as this tends to bring drought to many parts of the globe, meaning less carbon is stored in plant growth).

A glimmer of hope is that our carbon dioxide emissions from fossil fuels have, for the first time in decades, stopped increasing. This trend has been evident over the past couple of years, mainly due to a decline of coal use in China, which recently announced the closure of around 1,000 coal mines.

Have we underestimated global warming?

Does the “spike” change our understanding of global warming? In thinking about climate change, it is important to take the long view. A predominant La Niña-like situation over recent years did not mean global warming had “stopped” as a few public figures were (and probably still are) claiming.

Likewise, a hot spike due to a major El Niño event – even though it is surprisingly hot – doesn’t mean global warming was underestimated. In the longer run the global warming trend agrees very well with longstanding predictions. But these predictions nevertheless paint a picture of a very warm future if emissions are not brought down soon.

The situation is similar to that of a serious illness like cancer: the patient usually does not get slightly worse each day, but has weeks when the family thinks he may be recovering, followed by terrible days of relapse. The doctors do not change their diagnosis each time this happens, because they know this is all a part of the disease.

Although the current El-Niño-driven spike is temporary, it will last long enough to have some severe consequences. For example, a massive coral bleaching event now appears likely on the Great Barrier Reef.

Here in Australia we have been breaking heat records in the past few months, including 39 straight days in Sydney above 26℃ (double the previous record). News reports seem to be focusing on the role of El Niño, but El Niño does not explain why oceans to the south of Australia, and in the Arctic, are at record high temperatures.

The other half of the story is global warming. This is boosting each successive El Niño, along with all its other effects on ice sheets and sea level, the global ecosystem and extreme weather events.

This is the true climate emergency: it is getting more difficult with each passing year for humanity to prevent temperatures from rising above 2℃. February should remind us how pressing the situation is.