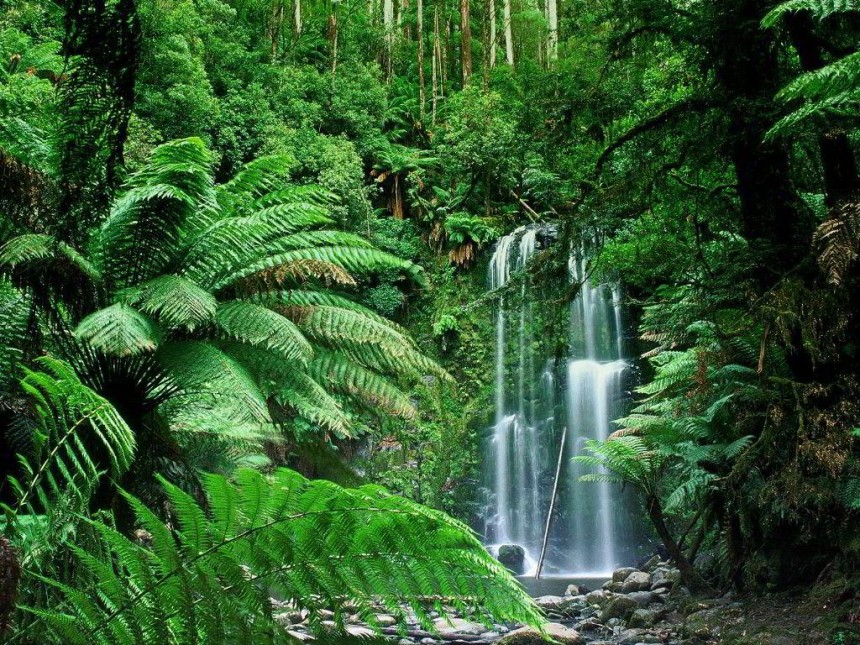 Enhanced atmospheric CO2 concentrations (eCO2) have exerted a profound impact on the Earth’s carbon, water and energy cycles. New research led by Dr Yuting Yang and colleagues of CSIRO Land and Water shows that long-term eCO2 in tropical rainforest ecosystems has increased vegetation photosynthetic capacity and leaf-level light use efficiency whilst having little impact on foliage area or hydrological partitioning.

The team analyzed trends in satellite-recorded vegetation indices and in situ hydrometerological variables. This information was then combined with “top-down” ecosystem modelling, based on gas-exchange theory, and applied across 18 unimpaired tropical rainforest catchments over the past three decades (figure below). The authors found that the increased vegetation photosynthetic capacity and leaf-level light use efficiency occurred in proportion to the magnitude of eCO2 for a given location. The findings are also supported by the ensemble outputs of ten process-based “bottom-up” ecosystem models over the same catchments and period.

Comparison of model estimates from the top-down analytical model (x axis) and the bottom-up ecosystem models (y axis). Comparison of the relative changes is shown for (a) assimilation, (b) light use efﬁciency, and (c) evapotranspiration across the 18 catchments over 1982–2010.

For ecologists, this study highlights the importance of considering the eCO2 effect in determining the carbon exchange between the land surface and the atmosphere, especially given the fact that tropical rainforests contribute about 1/3 of the Earth’s terrestrial gross primary production. For a hydrologist working in tropical rainforest catchments, this study suggests little effect to date of the eCO2 effect on water resources.

The authors note finally that it would be best if these findings were confirmed by a FACE experiment located in tropical evergreen forests that simultaneously focused on the
ecophysiological and ecohydrological measurements.