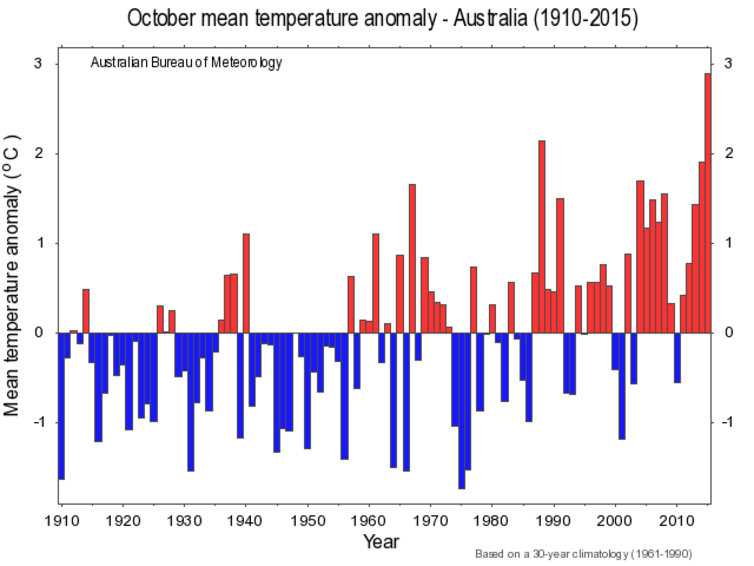 The State of the Climate in 2015 report, led by the US National Oceanic and Atmospheric Administration, was released yesterday. Unfortunately, it paints a grim picture of the world’s climate last year.

For a second consecutive year the globe experienced its hottest year on record, beating the 2014 record by more than 0.1℃. From May 2015 onwards, each month set a temperature record for that particular month, a pattern that has yet to end.

The record-breaking temperature anomaly in 2015 (around 1℃ higher, on average, than what would be expected in a world without humans) was in large part due to human-caused climate change. A small fraction of the heat was because of a major El Niño event, which developed midway through 2015 and ran into this year.

During El Niño events we see warmer sea surface temperatures in the central and eastern Pacific Ocean. A resulting transfer of heat from the ocean into the lower atmosphere causes a temporary warming effect. In La Niña seasons, the opposite happens.

Overall, about 0.05-0.1℃ of the global temperature anomaly for 2015 was due to El Niño. The bulk of the remainder was due to climate change. So even if we hadn’t had an El Niño last year, 2015 would still have been one of the hottest years on record.

Of the 16 hottest years ever recorded, 15 have happened this century.

Extreme events around the world…

At regional scales we also saw many extreme events last year. The downward trend in Arctic sea ice continued, with the lowest annual maximum extent on record. Alaska’s winter was almost non-existent, with many Arctic mammals and fish being forced to change their behaviour and shift their habitats.

Many extreme heatwaves occurred in 2015. These included a deadly hot spell in India and Pakistan and severe heat events in Europe and North America. Combined, these events killed thousands of people.

In Europe, various summer heat records were set in Spain, the Netherlands, France and Britain, while Germany posted an all-time record temperature.

Seasonal-scale extreme heat occurred over many parts of the globe. There were many more warm days and nights than normal over much of Europe in summer, and in Russia and North America in spring.

Across the world there were more tropical cyclones than normal, mainly due to increased cyclone activity across the Pacific basin, and many significant flood events. On the other hand, large areas suffered severe drought (14% of the land surface, up from 8% in 2014).

The Ethiopian drought devastated crops and affected millions of people. Parts of South America experienced the worst drought in 80 years. The western US drought continued, despite the fact that El Niño events usually bring this region some reprieve.

In Australia, probably the most significant climate extreme we had was the record heat in October.

The country experienced its biggest monthly temperature anomaly on record – almost 3℃ above the historical national average. The frequency of very warm days was also well above average. This unusual early heat triggered bushfires across the southeast.

Even given the El Niño event (which normally warms up Australia in spring and summer), the maximum temperature records that were set were, for example, at least six times more likely in Melbourne than they would have been in the absence of human-caused climate change.

For 2015 as a whole, Australia experienced its fifth-warmest year on record. Nine out of 12 months were warmer than average.

A continuation of climate change trends

The trend towards more heat extremes and fewer cold ones also continued. In fact, 2015 had about three times as many very warm days as very cold ones globally compared with the historical average.

A plethora of records was broken, with a human fingerprint being clear in many cases.

We already know that 2016 is very likely to overtake 2015 globally as the hottest year on record. As the El Niño peaked earlier this year we saw many extreme events around the world and in Australia. This included the devastating coral bleaching on the Great Barrier Reef, which would have been virtually impossible without human-caused climate change.

Unfortunately, in many ways, the climate of 2015 is not likely to stand out as especially unusual in a few years’ time. More record hot years are likely, with associated extreme weather events, as greenhouse gas concentrations continue to climb.

Only with rapid and substantial cuts to these emissions will it be possible to limit global warming to well below 2℃, a key aim of the Paris climate agreement, and reduce the likelihood of yet more climate records tumbling.