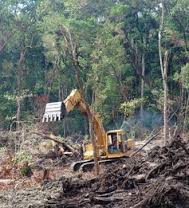 Land clearing is on the rise in Queensland and New South Wales, with land clearing laws being fiercely debated.

In Queensland in 2013–14, 278,000 hectares of native vegetation were cleared (1.2 times the size of the Australian Capital Territory). A further 296,000ha were cleared in 2014–15. These are the highest rates of deforestation in the developed world.

Land clearing on this scale is bad for a whole host of reasons. But our research shows that it is also likely to make parts of Australia warmer and drier, adding to the effects of climate change.

How do trees change the climate?

Land clearing releases greenhouse gases into the atmosphere, but the effect of land clearing on climate goes well beyond carbon emissions. It causes warming locally, regionally and even globally, and it changes rainfall by altering the circulation of heat and moisture.

Trees evaporate more water than any other vegetation type – up to 10 times more than crops and pastures. This is because trees have root systems that can access moisture deep within the soil. Crops and pastures have 70% of their roots in the top 30cm of the soil, while trees and other woody plants have 43% of their roots in the deeper part of the soil.

The clearing of deep-rooted native vegetation for shallow-rooted crops and pastures diminishes this process, resulting in a warmer and drier climate.

We can see this process at work along the “bunny fence” in southwest Western Australia, where there is a moister atmosphere and more clouds over native vegetation compared with nearby farming areas during summer.

Studies in Amazonia also indicate that as deforestation expands rainfall declines. A tipping point may be reached when deforestation reaches 30-50%, after which rainfall is substantially reduced. Complete deforestation results in the greatest decline in rainfall.

We wanted to know how land clearing could affect Australia’s climate in the future. We did this by modelling two scenarios for different amounts of land clearing, using models developed by CSIRO.

We found that restoring trees to parts of Australia would reduce surface temperatures by up to 1.6℃, especially in western Queensland and NSW.

Replanting trees could increase summer rainfall by 10% overall and by up to 15.2% in the southwest. We found soil moisture would increase by around 20% in replanted regions.

Our study doesn’t mean replanting all farmed land with trees, just areas that are less productive and less cost-effective to farm intensively. In our scenario, the areas that are restored in western Queensland and NSW would need a tree density of around 40%, which would allow a grassy understorey to be maintained. This would allow some production to continue such as cattle grazing at lower numbers or carbon farming.

The growing pressure to clear reflects a narrow economic focus on achieving short- to medium-term returns by expanding agriculture to meet the growing global demand for food and fibre.

However, temperatures are already increasing and rainfall is decreasing over large areas of eastern and southwest Australia. Tree clearing coupled with climate change will make growing crops and raising livestock even harder.

Balancing farming with managing climate change would give land owners on marginal land new options for income generation, while the most efficient agricultural land would remain in production. This would need a combination of regulation and long-term financial incentives.

The climate benefits of limiting land clearing must play a bigger part in land management as Australia’s climate becomes hotter and drier. Remnant vegetation needs to be conserved and extensive areas of regrowth must be allowed to regenerate. And where regeneration is not possible, we’ll have to plant large numbers of trees.