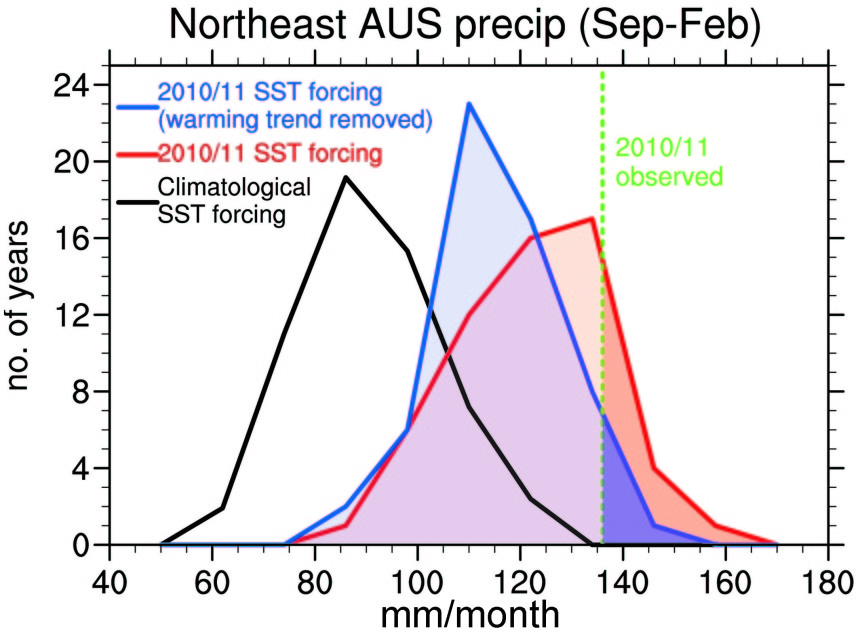 Australia experienced extreme rainfall during the 2010/11 La Niña event. Rainfall across the northeast was 84% above average, and soil moisture conditions were unprecedented since 1950. This extreme rainfall event was associated with severe flooding in northeastern Australia which claimed dozens of lives and caused billions of dollars in damages. In our study we demonstrate that the warmer ocean background state increased the likelihood of the extreme rainfall response.

The unusually wet 2010/11 season in Australia led to an observable drop in global sea level, as large amounts of water were temporarily shifted from the ocean onto Australia. In addition, record global terrestrial carbon uptake was driven by unusually high vegetation growth after the widespread wet conditions in the interior of the Australian continent, which included a rare filling of Lake Eyre.

These extreme hydroclimatic conditions coincided with a strong La Niña in the Pacific. While La Niña events are typically associated with wet conditions in the northeast, the severity of the conditions encountered across eastern Australia in 2010/11 were unusual even for a La Niña. Long-term ocean warming has made the oceans surrounding northern Australia about 0.5°C warmer than 60 years ago. Our study aimed to quantify if and by how much this long-term ocean surface warming contributed to the hydroclimatic extremes and ensuing flooding across northeast Australia during 2010/11.

Using a suite of atmospheric general circulation model experiments based on 2010/11 ocean conditions with and without long-term warming, we identify the mechanisms that increase the likelihood of extreme rainfall: additional ocean warming enhanced onshore moisture transport onto Australia with increased ascent and precipitation over the northeast. Thus, both dynamic and thermodynamic atmospheric changes contributed to the 2010/11 Australian extremes.

Our results highlight how ocean warming influences rain-producing atmospheric circulation conditions by providing additional moisture and changing circulation patterns. This increases the likelihood of extreme precipitation for Australia during La Niña events. Given continued warming it is likely that La Niña’s could be associated with increasingly extreme rainfall in the future.