Flood-related disasters take a significant number of human lives globally, besides causing substantial economic damage amounting to hundreds of millions of dollars per event. In low or middle-income countries, these disasters are largely due to underdeveloped flood warning systems. Flood warnings are generally based on well calibrated rainfall-runoff models, which require hydrological data over a watershed. However, acquisition of appropriate hydrological data is often insufficient in developing countries which makes flood warning difficult.

As a viable alternative to ground-based information, satellite remote sensing can detect and monitor spatiotemporal evolution of floods. The use of remotely sensed data for hydrologic prediction over sparsely or ungauged regions has been investigated across the world. For example, satellite-derived soil moisture data have been assimilated into hydrological models for correcting biases in precipitation, initial conditions or both. Lumped models have been widely used for such hydrologic modelling because of their simpler model structure. However, such lumped models are unable to account for the spatial heterogeneity of soil moisture and rainfall. While distributed models can be used to explicitly include the spatial heterogeneity, it generally requires high computational costs with large amounts of data and parameters. This is worsened by the fact that such data are not fully available for sparsely gauged or ungauged watersheds where flood warnings are most needed.

To address these limitations, a new approach has been developed by our team of scientists from the University of New South Wales (UNSW) and Korea University. The simplicity of the method is highlighted by only using three parameters for each watershed of interest, with effective regionalization allowing use in ungauged watersheds. The improved parameter estimates and skill scores obtained in the study were promising. Therefore, the study highlights the role of satellite remote sensing for detecting and monitoring the spatial evolution of floods. 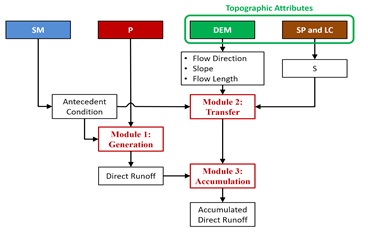 Our paper published in IEEE journal presents the first-ever research that used a simple flood warning method that provides a qualitative assessment of near real-time flood risk across a watershed by combining readily available satellite-derived soil moisture data with open-access rainfall, topographic and soil data at a coarse spatial resolution.

We used a methodology that consists of three hydrologic modules that represent the generation, transfer and accumulation of direct runoff. To simplify the modelling and provide timely warnings, the flood risk is ascertained based on the frequency of exceedance, with warnings issued if above a specified threshold. For this proof-of-concept study, the proposed model was calibrated and tested for 65 hydrologic reference stations in the Murray-Darling Basin in Australia over a 35-year study period by using satellite-derived surface soil moisture.

Our results for estimated parameters and skill scores showed promise. The three model parameters can be regionalized as a function of watershed characteristics, and/or representative values estimated from neighbouring watersheds, allowing use in ungauged basins everywhere.