Another attack on the Bureau, but top politicians have stopped listening to climate change denial Has the Australian climate change debate changed? You could be forgiven for thinking the answer is no.

Just this week The Australian has run a series of articles attacking the Bureau of Meteorology’s weather observations. Meanwhile, the federal and Queensland governments continue to promote Adani’s planned coal mine, despite considerable environmental and economic obstacles. And Australia’s carbon dioxide emissions are rising again.

So far, so familiar. But something has changed.

Those at the top of Australian politics are no longer debating the existence of climate change and its causes. Instead, four years after the Coalition was first elected, the big political issues are rising power prices and the electricity market. What’s happening?

A few years ago, rejection of climate science was part of the Australian political mainstream. In 2013, the then prime minister Tony Abbott repeated a common but flawed climate change denial argument:

Australia has had fires and floods since the beginning of time. We’ve had much bigger floods and fires than the ones we’ve recently experienced. You can hardly say they were the result of anthropic [sic] global warming.

Abbott’s statement dodges a key issue. While fires and floods have always occurred, climate change can still alter their frequency and severity. In 2013, government politicians and advisers, such as Dennis Jensen and Maurice Newman, weren’t shy about rejecting climate science either.

The atmosphere is different in 2017, and I’m not just talking about CO₂ levels. Tony Abbott is no longer prime minister, Dennis Jensen lost preselection and his seat, and Maurice Newman is no longer the prime minister’s business advisor.

Which Australian politician most vocally rejects climate science now? It isn’t the prime minister or members of the Coalition, but One Nation’s Malcolm Roberts. In Australia, open rejection of human-induced climate change has moved to the political fringe.

Roberts has declared climate change to be a “fraud” and a “scam”, and talked about climate records being “manipulated by NASA”. He is very much a conspiracy theorist on climate, as he is on other topics including banks, John F. Kennedy, and citizenship. His approach to evidence is frequently at odds with mainstream thought.

This conspiratorial approach to climate change is turning up elsewhere too. I was startled by the author list of the Institute of Public Affairs’ new climate change book. Tony Heller (better known in climate circles by the pseudonym Steven Goddard) doesn’t just believe climate change is a “fraud” and a “scam”, but has also promoted conspiracy theories about the Sandy Hook school massacre. This is a country mile from sober science and policy analysis.

So where is the Australian political mainstream? It’s not denying recent climate change and its causes, but instead is now debating the policy responses. This is exemplified by political arguments about the electricity market, power prices, and the Finkel Review.

While this is progress, it’s not without serious problems. The debate may have rightly moved on to policy rather than science, but arguments for “clean coal” power are at odds with coal’s high CO₂ emissions and the failure thus far of carbon capture. Even power companies show little interest in new coal-fired power plants to replace those that have closed. 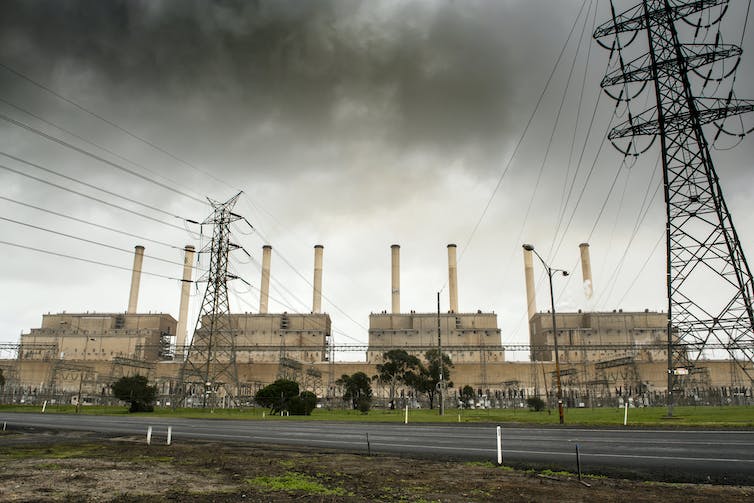 The closure of the Hazelwood power station was politically controversial. Jeremy Buckingham/flickr

Have those who rejected global warming and its causes changed their tune? In general, no. They still imagine that scientists are up to no good. The Australian’s latest attacks on the Bureau of Meteorology (BoM) illustrate this, especially as they are markedly similar to accusations made in the same newspaper three years ago.

This week, the newspaper’s environment editor Graham Lloyd wrote that the BoM was “caught tampering” with temperature logs, on the basis of measurements of cold temperatures on two July nights at Goulburn and Thredbo. For these nights, discrepant temperatures were in public BoM databases due to automated weather stations that stopped reporting data. The data points were flagged for BoM staff to verify, but in the meantime an amateur meteorologist contacted Lloyd and the Institute of Public Affairs’ Jennifer Marohasy.

In 2014, Lloyd cast doubt on the BoM’s climate record by attacking the process of “homogenisation,” with a particular emphasis on data from weather stations in Rutherglen, Amberley and Bourke. Homogenisation is used to produce a continuous temperature record from measurements that may suffer from artificial discontinuities, such as in the case of weather stations that have been upgraded or moved from, say, a post office to an airport.

Lloyd’s articles from this week and 2014 are beat-ups, for similar reasons. The BoM’s ACORN-SAT long-term temperature record is compiled using daily measurements from 112 weather stations. Even Lloyd acknowledges that those 112 stations don’t include Goulburn and Thredbo. While Rutherglen, Amberley and Bourke do contribute to ACORN-SAT, homogenisation of their data (and that of other weather stations) does little to change the warming trend measured across Australia. Australia has warmed over the past century, and The Australian’s campaigns won’t change that.

In 2014, the government responded to The Australian’s campaign by commissioning the Technical Advisory Forum, which has since reviewed ACORN-SAT and found it to be a “well-maintained dataset”. Prime Minister Abbott also considered a taskforce to investigate BoM, but was dissuaded by the then environment minister Greg Hunt.

How will Malcolm Turnbull’s government respond to The Australian’s retread of basically the same campaign? Perhaps that will be the acid test for whether the climate debate really has changed.