CSIRO questions whether all Australia’s emissions cuts are real The nation’s pre-eminent science agency has cast doubt on the environmental benefits claimed under the Morrison government’s main climate policy, raising concerns Australia is overstating its contribution to the fight against global warming.

Despite concerns over the scheme, known as the emissions reduction fund, there is speculation it will receive a federal budget cash injection of up to $1 billion over three years as the government seeks to neutralise claims it is failing to address dangerous climate change.

The emissions reduction fund was introduced by the Abbott government in 2014 after it abolished Labor’s so-called carbon tax. The measure remains the flagship climate policy under Prime Minister Scott Morrison.

The $2.55 billion fund, part of the government’s Direct Action plan, pays businesses, landowners and others to carry out projects that reduce carbon emissions, or capture and store carbon that already exists in the atmosphere. About $226 million remains in the fund.

About half the carbon abatement pledged under the fund – or 95 million tonnes – relates to farming projects that use one of two native revegetation methods.

The projects are mostly on grazing land in north-west NSW and south-west Queensland. They involve changes to farming practices such as limiting cattle grazing and managing feral animals, to allow native plants to regrow. The plants then draw carbon dioxide from the atmosphere and store it as carbon. Under the scheme, the amount of carbon sequestered through revegetation projects must be additional to what would have occurred otherwise.

A government-appointed expert committee has been examining the performance of the revegetation methods.

In a joint submission to the committee, the CSIRO and the NSW Department of Primary Industries cast doubt on whether all emission reduction claimed under the methods was genuine.

The submission said the growth of shrubs onto grassland, which indicates revegetation, may not be attributable to funded projects but to other factors, such as increased concentrations of carbon dioxide in the atmosphere or the changing climate. 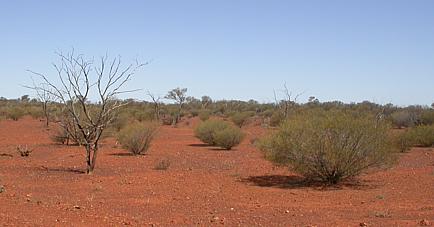 It said recent evidence of revegetation in arid and semi-arid regions of Australia “raises questions over whether the … [emissions reduction fund] projects result in entirely additional carbon abatement”.

The agencies also noted substantial “uncertainty” in the carbon accounting model used to measure abatement under the two methods, which also lacked “underpinning research” to support its predictions.

Under the scheme, estimates of abatement should be conservative. However the CSIRO and the department expressed “particular concern” over a reliance on “subjective assessments by project proponents” of factors such as the effect of grazing on carbon stocks.

The National Farmers Federation submission said drought conditions may limit vegetation growth, potentially meaning the actual carbon sequestered by farming projects “does not meet the estimates” and so proponents are denied payment under the scheme. The federation also said vegetation set aside for carbon storage may be needed as animal fodder during drought.

However carbon farming project developers Climate Friendly said in a submission that its vegetation method met standards designed to ensure that carbon offsets were genuine. It said farming activities such as altered grazing management were “a significant departure from business-as-usual and [are] resulting in transformational changes”.

In a statement, the Department of the Environment and Energy said the emissions reduction assurance committee, which was reviewing the methods, had considered issues raised in the submissions.

It said claims for carbon credits were “subject to an assessment process and robust auditing regime overseen by the Clean Energy Regulator”.

Labor’s climate change spokesman Mark Butler said his party was “concerned by any evidence the ERF has not led to the abatement the government claims”.

“We have long said the ERF is an ineffective policy, with taxpayers paying for abatement that will have happened in any event without taxpayer support. This is just another example of the government’s inability to deliver real and effective climate policies,” he said.

Moderate Liberal MPs fearful of an electoral backlash over climate inaction have reportedly been pushing for the emissions reduction fund to be topped up, and Environment Minister Melissa Price has signalled its scope could be widened to include threatened species management.

The Coalition’s far right has exerted a heavy influence over the government’s climate policies this term, including deposing former prime minister Malcolm Turnbull over the National Energy Guarantee.

Conservative MP Craig Kelly said while the emissions reduction fund had “achieved its objectives” it should now be phased out.

“We get a lot of [emissions] reduction through technological improvements and I think that is the best way to go, rather than to use this fund,” he said.

“I would be reluctant [to re-finance it], there are so many other things we need to spend money on.”