The Coalition government’s ag leaders are putting climate change and sustainability on the agenda, but don’t expect new policies like emissions trading just yet – the solutions will be industry-led.

“The world will be challenged by natural resources degradation, loss of environmental assets and biodiversity,” Ms Ruston told the Agricultural and Resource Economics and Statistics 2018 Outlook conference in Canberra.

“At the risk of sounding like a greenie, we will have all sorts of impacts from climate change… we need to rethink food systems, they have to become more resilient to shocks and disruption,” she said.

“We need systems that actually reverse the impacts of climate change.”

“Some people don’t believe Australia should strive for these goals, but I believe it’s imperative to ensure a safe and prosperous future for our country.” 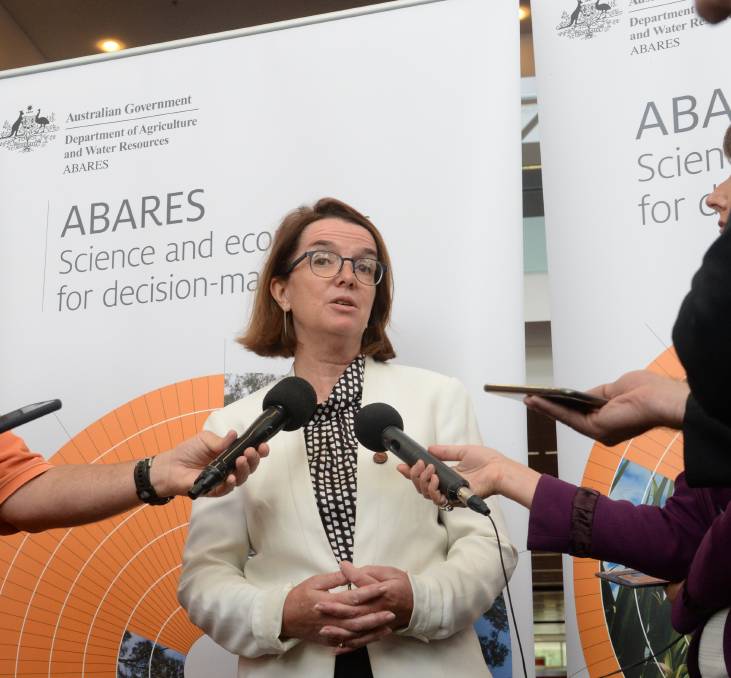 Assistant Minister for Agriculture and Water Resources Senator Anne Ruston at ABARES Outlook 2018.
In a week when new Nationals leader Michael McCormack’s former climate-sceptic statements to parliament in 2012 were on show, and new Agriculture Minister David Littleproud issued support for renewable energy as an opportunity for agriculture, the conservative government seems to be edging towards a more progressive policy position.

However, when questioned on the need for targeted policy interventions to change industry practice, such as an emissions trading scheme, Ms Ruston said the private sector should take the lead.

“Industry should be allowed to explore the opportunities” to respond to climate change, she said.

Government would not target any new initiatives for climate change adaptation as ongoing public and private investment in research and development, from organisations such as the Rural Development Corporations, was already underway.

“We’re not investing specifically in programs, our response to climate change is embedded in everything we do,” Ms Ruston said.

“This will require a huge national effort (and) … we don’t want you to leave these decisions entirely up to government.

“We need to ensure research and development is no longer a subsidy, but an investment.”

Ms Ruston said Australia should lead the world in its response to climate issues, not just for environmental and commercial imperatives, but also to address urgent geopolitical risks.

“While countries like Australia are ahead of the curve in responding the climate change, we know it (climate) will have disproportionate impacts on regions that haven’t traditionally enjoyed food security.

“Poverty in itself is a source of conflict. Competition for resources like arable land and fresh water will remain a cause of conflict and this can only increase.

“Just doing more with the same is no longer an option for the world.”