In an ideal world we would have river discharge measurements for every river spanning many decades and updated in real time. We all know this is very far from reality with severe gaps in the global observing network (Lavers et al., 2019), and provides a fundamental challenge for hydrological monitoring and forecasting.

A way forward pioneered in the field of meteorology and climate is to optimally combine available in situ and satellite Earth system observations with advanced Numerical Weather Prediction (NWP) models to generate a ‘reanalysis’ of atmospheric, land, and ocean variables of interest, thus providing consistent spatio-temporal “maps without gaps” (Hersbach et al., 2018) for the main Earth system components.

ECMWF’s latest global atmospheric reanalysis, ERA5, produces a wide range of variables relevant to hydrology, such as precipitation, temperature, evaporation, vegetation, soil moisture, snow, and surface and sub-surface runoff. However, in the current generation of NWP, as used within ERA5, runoff from one cell is not connected to neighbouring cells, hence river discharge at catchment scales is not directly available (yet!). ERA5 therefore has limited utility in hydrological applications such as flood and drought monitoring and forecasting.

The ‘river discharge’ piece of the jig-saw is provided by the Global Flood Awareness System (GloFAS; http://www.globalfloods.eu/) by coupling gridded surface and sub-surface runoff from the land surface model used within ERA5, HTESSEL, with the LISFLOOD hydrological and river channel routing model to produce the GloFAS-ERA5 reanalysis dataset (see schematic in Figure 1). 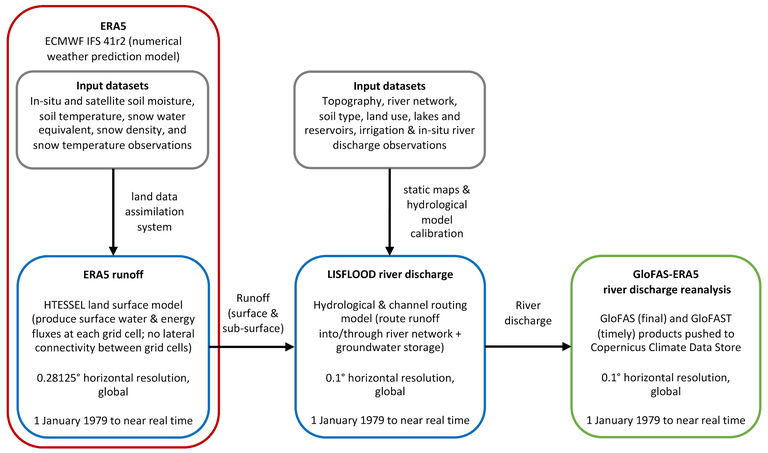 Figure 1.: A schematic of the key components in the production of the GloFAS-ERA5 river discharge reanalysis dataset (source: Harrigan et al., 2020).

The newly released GloFAS-ERA5 river discharge reanalysis is a global gridded dataset with a horizontal resolution of 0.1° at a daily time step. An innovative feature is that it is produced in an operational environment so is available to users from 1 January 1979 until near real time (2 to 5 days behind real time).

Figure 2 maps the mean daily river discharge over 1979 to 2018 for each GloFAS river with an upstream area greater than 1000 km2, revealing the main river arteries of the world. 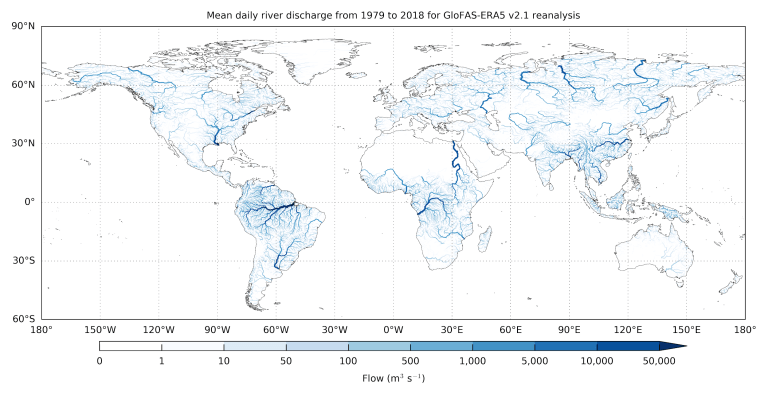 Full details of the production and description of the GloFAS-ERA5 dataset, and its evaluation against a global network of river discharge observations using the Kling-Gupta Efficiency Skill Score (KGESS), can be found in the data paper GloFAS-ERA5 operational global river discharge reanalysis 1979–present by Harrigan et al. (2020) submitted for open review in Earth System Science Data Discissions (ESSDD).

Access to the GloFAS-ERA5 dataset is provided through the Copernicus Climate Change Service (C3S) Climate Data Store (CDS) and can be downloaded from here. The dataset is a product of GloFAS which is funded by the European Commission’s Copernicus Emergency Management Service (CEMS) which has a data policy of free, full, and open access. The dataset can be downloaded manually via the ‘Data Download’ tab or from a dedicated Python CDS API (see Appendix B in the data paper for an example API retrieval script).

We are using the dataset within GloFAS for two main tasks: 1.) for deriving initial conditions for both flood and seasonal hydrological forecasts, and 2.) to generate long-term flood thresholds for every river to provide awareness of a flood signal when the threshold is exceeded by the operational river discharge forecasts.

We also hope the dataset will be useful to others for large-scale hydrology applications ranging from monitoring global flood and drought conditions, understanding hydroclimatic variability and change, initialising hydrological forecasts, and as raw input to post-processing and machine learning methods that can add further value.

If you have any feedback on the dataset or manuscript then please join in the open discussion within the ESSDD journal or leave a reply in the HEPEX blog comment box below.