Drought is in the news here in New South Wales, Australia. But how are rainfall, drought and groundwater related?

First, we need to understand what drought is. Is it a water shortage? Or a lack of rainfall? Or something else? In the USA, the National Climatic Data Center define drought as the ‘absence of water’. They identify four types of drought: 1) meteorological drought (a lack of rainfall), 2) hydrological drought (a loss of surface water or groundwater supply), 3) agricultural drought (a water shortage leading to crop failure), and 4) socioeconomic drought (where demand for water exceeds availability).

Here in Australia, the Bureau of Meteorology defines drought as ‘a prolonged, abnormally dry period when the amount of available water is insufficient to meet our normal use’.  They add that ‘drought is not simply low rainfall; if it was, much of inland Australia would be in almost perpetual drought’. Much of inland Australia depends on surface and groundwater for their economy. If those regions experienced a groundwater drought, it would therefore be bad news.

Let’s look at New South Wales again. It covers both coastal regions, such as Sydney (where I am writing this), as well as a vast interior (where most of my research is based). The Bureau of Meteorology produces meteorological drought maps based on rainfall amounts over recent months. The current map shows large areas of New South Wales are experiencing rainfall totals that are in the lowest 10 percentile (‘serious’), lowest 5 percentile (‘severe’) and the lowest on record.

How does this deficiency in rainfall affect groundwater? And is there a groundwater drought? Long-term measurement of groundwater levels in boreholes (also called wells, depending on your country) can tell you whether water levels are rising or falling. Wells integrate groundwater recharge that comes from both surface water (e.g. rivers that lose water through their base) and from rainfall (also called diffuse recharge).

Real-time data of water levels from telemetered boreholes can provide timely information on groundwater drought (for example, here for NSW). Satellite products such as GRACE, which can infer groundwater levels from small changes in gravity over time, can provide large scale spatial coverage. Modelling products can calculate water balance from meteorological, soil and land use data.

The current Bureau of Meteorology map shows that deep soil moisture is very much below average across New South Wales. If we assume that deep soil moisture levels are only determined by rainfall recharge, then from this we would expect no rainfall recharge of groundwater to be occurring over large parts of New South Wales. From one location, Wellington, close to the middle of the drought region, we have the measured evidence from inside a cave that shows that rainfall recharge hasn’t occurred for 18 months (and counting).

Since 2011, forty loggers have been measuring the water percolating through the unsaturated zone of the limestone at a depth of 25 m at Wellington Caves. This winter, I did the latest download of the data. Or rather, the lack of data, as only four drip water sources were still active. Conditions in the cave are the driest since we started collecting data in 2011. 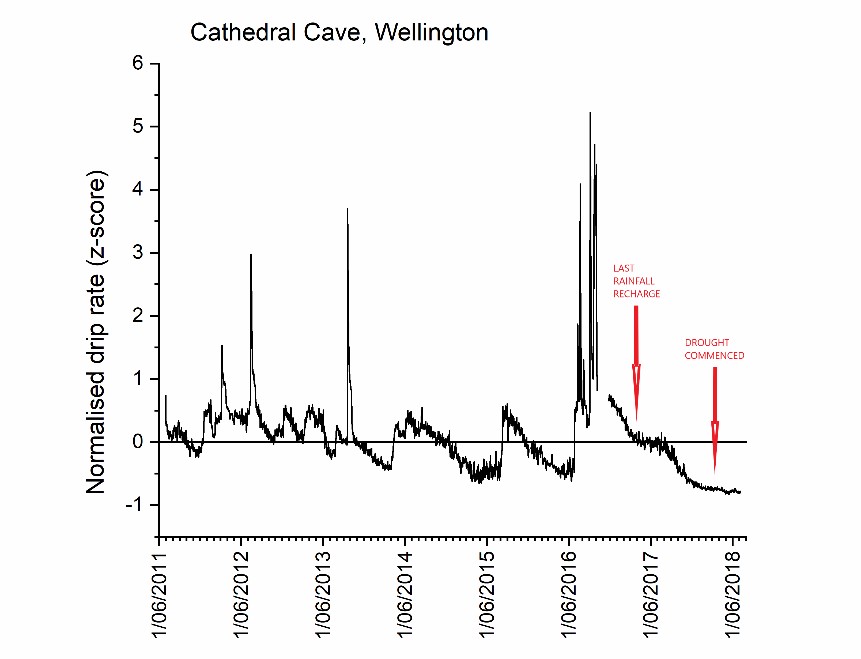 Drip rates have been on the decline since the winter of 2016. But note the decline temporarily slowed in 2017, starting in early April. That is the response to the last time there was rainfall recharge there – owing to almost 70 mm of rain falling over three days in late March 2017. Eighteen months ago.

In the inland of New South Wales, it is clear that in dryland farming regions, the lack of rainfall has now led to an agricultural drought. In contrast, latest available data from our groundwater monitoring networks shows that there is currently no decline in groundwater levels in the major irrigation districts, which is where river recharge occurs. But for our dryland farmers, and ecosystems that rely on rainfall recharge, the karst drip data show that the groundwater drought has hit. Australia is often called a country of drought and flooding rains. Flooding rains are what we need next so that we also have some river recharge to replenish our groundwater resource.