Would you like to be involved in a summer institute for the very best students from across Australia? Here’s your chance!

If you were at the most recent OzEWEX national workshop, you will probably recall Professor David Maidment presenting on the National Water Centre Summer Institute (NWCSI) organized in the US in 2015. The idea led to considerable excitement among the workshop participants and a decision to attempt to organise a similar event in Australia. Over the last few months, I have spoken with several people in government agencies, universities and research programs to gauge the interest in planning for such an event in Australia, with encouraging outcomes. In this post, I want to summarise the idea and call upon any of you keen to make a Climate and Water Summer Institute happen in Australia.

The US version – brief summary 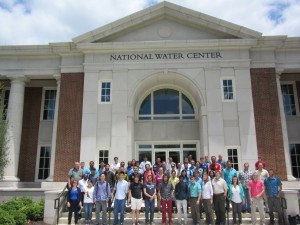 Participants of the 2015 NWC Summer Institute

The NWC Summer Institutes take place at the University of Alabama and the National Water Center, this year from June 6 – July 20, 2016. Student research fellows will collaborate intensively for seven weeks to work on projects designed to contribute to the NWC goals of enhancing water-related products and decision-support services across the country. The institute includes a 2-week ‘boot camp’ with intensive training and project design, followed by a 5-week project execution phase, where teams of 3-4 work together towards the chosen goal. To facilitate this process, six project themes have been defined in advance, each of which revolves around the use of next generation technology and data to address an ambitious R&D idea at national scale (i.e., flood inundation mapping, indirect measurement, data assimilation and forecast error, continental water balance, community case studies, and flood emergency response). The summer institute is led by Theme Leads and daily oversight is provided by post-doctoral fellow course coordinators.  The home institution advisor is supported to attend the boot camp or capstone event. Following the Summer Institute, the most successful students will be selected and invited to attend the CUAHSI Biennial Meeting July 25-27, 2016 to present their work during a special session. Applications are accepted from current and incoming graduate students and post-docs within three years of graduating with their PhD.

How would it work in Australia?

That’s what we need to find out. I will be participating in the upcoming summer school in June to better understand how the NWCSI is run and how it might translate to Australia. However, it is already clear that we would need to be a bit less ambitious: the 2015 NWCSI had 44 students from 19 universities participating, and the organisers could bring to bear a considerable budget, a designated venue, secretarial support and the support from a resourced community organisation, CUAHSI.

Discussion so far has thrown up a number of good suggestions to modify the model for Australia:

Discussions so far suggest that the best timing for an Australian event would be during the summer break, probably starting in early December 2016 and ending in January 2017, with a Christmas break in between.

One further suggestion was to require participating students to cover their own costs. We have stepped away from this because it would affect the uniqueness of the proposed institute, a prestigious opportunity for only the most talented individuals, rather than ‘just another summer school’ attracting only those who can cover their own costs. That said, some personal contribution (e.g., to travel expenses) may not be entirely avoidable. Another prestigious element of the summer institute would be its national scale and close involvement of national institutions (e.g., Bureau of Meteorology, Geoscience Australia, CSIRO) and national facilities such as National Computational Infrastructure. For that reason, Canberra may be the most logical location for the event.

The R&D themes pursued would likely involve a combination of data services (Earth observation, GIS and in situ) with model or analysis tools, and be within the general area of natural resources and hazards applications related to climate and water. That obviously still leaves a wide field; the set of themes will be narrowed down as a function of the thematic and technology priorities that sponsor organisations put forward and volunteering Theme Leaders are willing to supervise.

A current, rough estimate of the budget required to cover a combined OzEWEX workshop and summer institute for around 10-20 students would be in the order of $50,000.  Early discussions suggest that it should be possible to reach this number.

Over the next week, we will be seeking to raise sponsorship from public and private organisations that would benefit from such an event. In addition, we will be seeking in-kind contributions in the form of theme leadership, mentoring, a group venue and workspace for the students, computational and data infrastructure, access to software tools, etcetera.

Some of the benefits for an organisation to participate could include:

In addition, we will be seeking individuals interested to act as (co-) Theme Leaders; participating in the 2-week intensive component and/or acting as mentors for students embedded in their organisation during the project execution phase. Your expenses would be covered, but your time would need to be an in-kind contribution.

What can I do?