Australia’s reputation as a world leader in water management is well-deserved, according to a Productivity Commission review.

But it warned that there was more to do to implement the goals of the 2004 National Water Initiative, and to make sure progress already made was not undone.

In a draft report released today, the commission assessed Australia’s water reform effort over the past decade.

The report looked at the development of water rights and trading, and an increased emphasis on environmental flows and improvements.

However, it avoided scrutiny of the Murray-Darling Basin Plan, which will be the subject of its own Productivity Commission review next year.

Dr Doolan found that the objectives of the National Water Initiative had ”largely been met” and the creation of water rights and trading benefited farmers during drought as a way to generate income.

The report said water metering, accounting and compliance systems were in place ”in all jurisdictions”.

“Compliance and enforcement is really critical, it underpins the integrity of the entitlement system and the markets,” Dr Doolan said. “It’s really important that all water users and communities have confidence in the systems we’ve set up.”

The commission looked at compliance systems that jurisdictions had put in place, but did not delve into whether those systems had been well implemented.

“Next year we’re doing the inquiry into the implementation of the Murray-Darling Basin Plan,” Dr Doolan said.

”That’s when we will take a very deep dive into all those issues, including [compliance] and I suppose we’ll be able to draw on the number of inquiries that are currently underway.” 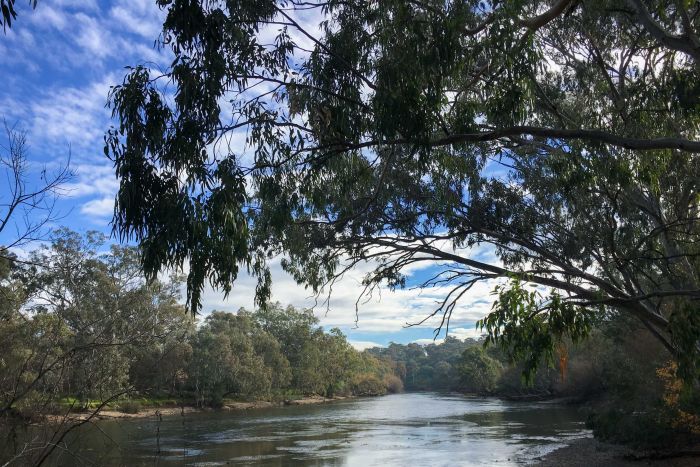 A climate change plan is needed for rivers such as the Murray, says the Productivity Commission. (ABC: Anna Vidot)

Dr Doolan said the report was not undermined by delaying its consideration of the Basin Plan, which represents the single largest water reform in Australian history.

While it was not the focus of this inquiry, she said the commission had touched on the Basin Plan in considering environmental watering reform.

“Clearly the Murray-Darling Basin is the biggest effort in water recovery in the country,” Dr Doolan said.

“But the actual detail of how that plan has been implemented and how effective that is, that is for next year.”

It noted that in the southern Murray-Darling in 2008-09 alone, trading enabled a $220 million boost to Australia’s gross domestic product. That increase came despite 2008-09 being a drought year.

The value of water entitlement in the southern Murray-Darling Basin was about $13 billion, Dr Doolan said.

The report contained a recommendation to bring water entitlements for extractive use — such as mining and coal seam gas — in line with other users’ entitlements.

Call for groups to be streamlined

It noted the vast number of governments, groups and agencies that played a role in water management — along the Murray-Darling in particular — and called for more streamlining.

This could be done by disbanding the Living Murray program and giving states responsibility for that water as part of their existing environmental holdings.

It also recommended that decisions about watering for environmental outcomes be made at a local level where possible. “You’ve got to integrate the delivery of water with what’s happening on the ground: pest management, fishways, riparian restoration — all those things are important to make sure you get the environmental outcomes that you’re after,” Dr Doolan said.

The commission gave the example of the Wimmera River as one which was “reasonably disconnected” and one where the Commonwealth Environmental Water Holder might devolve some of its watering responsibilities.

“It’s possible to think about getting the local catchment management authority, which is the local waterway manager, to have a strong role and an ongoing role in delivering that water,” Dr Doolan said.

Indigenous voices have often struggled to be heard in Australia’s noisy and divisive water policy debates and the commission called for cultural objectives to be explicitly recognised in all future water plans.

Dr Doolan said that the National Water Initiative did not include consideration of water allocation for Indigenous groups for economic purposes — something that had been highlighted by Indigenous representatives.

“We do think it’s a matter for governments whether they want to provide those entitlements or not,” Dr Doolan said.

“But where they do, we think it should be within the existing water entitlement frameworks: in the south, buy entitlements on the markets [because] it’s for consumptive use.

“In the north, if there’s unallocated water, we’ll allocate it from the consumptive pool.”

The commission will accept submissions on its draft report and will hold hearings in Canberra, Brisbane, Sydney, Melbourne, and Perth in October.

A final report will be delivered to government by the end of the year.