Soil moisture plays a critical role in land surface processes and as such there has been a recent increase in the number and resolution of satellite soil moisture observations and the development of land surface process models with ever increasing resolution. Despite these developments, validation and calibration of these products has been limited due to lack of observations on corresponding scales.

Cosmic-ray soil moisture sensors use naturally occurring cosmic-ray neutrons to continuously measure soil moisture at a scale of ~ 30 ha. A network of these sensors has been deployed across Australia to provide open-access soil moisture data. Our recently developed mobile soil moisture monitoring platform, known as the “rover”, offers opportunities to overcome the scale issue. The Rover essentially packs multiple cosmic-ray sensors into a dedicated trailer and the increased sensing power enables users to drive through the landscape mapping soil moisture over very large scales. This is an important advancement as soil moisture observations at such scales have previously not been possible. 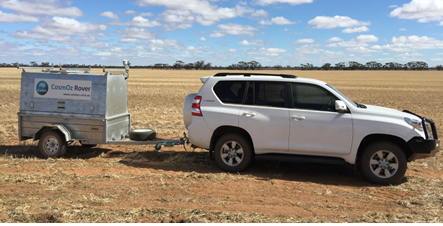 Our series of new Rover surveys confirmed that this technology can successfully produce multiscale soil moisture products. The research conducted by our team of scientists from CSIRO, using a cropping district in the Mallee region of Victoria as the case study, revealed that temporal patterns in soil moisture were preserved through time and regression modelling approaches were utilised to produce time series of property scale soil moisture which may also have application in calibration and validation studies or local farm management. Intensive scale rover surveys produced reliable soil moisture estimates at 1 km resolution while broad scale surveys produced soil moisture estimates at 9 km resolution. Therefore, our study highlights the role of the “rover” technology for the determination of soil moisture.

The paper published in the Journal of hydrology and earth sciences, shows the methods, results and validation of our new technology.  It describes approaches for converting rover survey neutron counts to soil moisture and discusses the factors controlling soil moisture variability. Independent gravimetric and modelled soil moisture estimates collected across both space and time were used to validate rover soil moisture products.

The field experiments were split into two groups which were commensurate with the model and satellite retrievals. The first group involved static cosmic ray neutron sensors and rover surveys across broad scales of 36 x 36 km at 9 km resolution and average driving speeds of up to 90 km/h, while the second group involved intensive scales of 10 x 10 km at 1 km resolution, driven at much lower speeds of around 30 km/h.

With the methodology around this technique now established our next task is to turn our attention to assessing the performance of satellite soil moisture retrievals and finer scale soil moisture models.

We would love to put our Rover to work on a variety of large scale soil moisture monitoring projects so feel free to contact us to discuss any opportunities.