Which precipitation dataset should one use?

To better answer this question, a team of scientists from USA, Europe and Australia have recently carried out the most comprehensive global-scale evaluation of precipitation datasets to date. They evaluated 13 non-gauge-corrected precipitation datasets using observations from ~75,000 gauges worldwide. Another nine gauge-based precipitation datasets were assessed using hydrological modelling for ~9000 catchments, by calibrating a simple conceptual rainfall-runoff model against observed streamflow data.

The paper published in Journal of Hydrology and Earth Systems Science (see the open-access paper available here), presents the first ever research that has analysed such a large number of precipitation datasets using so many gauges and catchments, many of which are located in Australia.

The new study found a large disparity in performance among the precipitation datasets across the globe, underscoring the importance of precipitation dataset choice. In general, the fully passive microwave-based satellite datasets (e.g., TMPA 3B42RT) outperformed the fully infrared-based ones (e.g., PERSIANN-CCS), while the datasets incorporating daily gauge data (e.g., MSWEP) outperformed the ones incorporating monthly gauge data (e.g., WFDEI). The datasets based exclusively on numerical weather model output (e.g., ERA-Interim) consistently outperformed the ones based exclusively on satellite data (e.g., CMORPH) in tropical regions, whereas the opposite was the case in cold regions (as illustrated in this tweet). 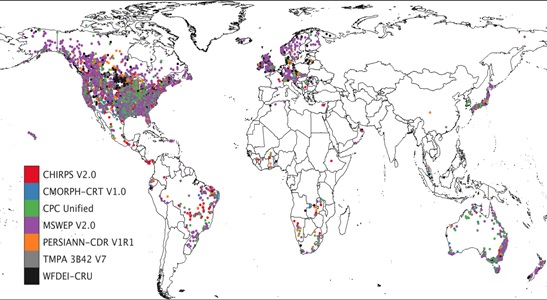 For each catchment, the precipitation dataset that provided the best streamflow simulations (From Beck et al., 2017)

“Our initial motivation for conducting this study was to assess the performance of the Multi-Source Weighted-Ensemble Precipitation (MSWEP) global precipitation dataset (see www.gloh2o.org), which we have recently developed. To our delight, MSWEP did indeed perform best overall in the evaluation. However, the dataset is not a one-size-fits-all solution as it did not perform the best everywhere. In some regions of South America, for example, CHIRPS performed better, while in Africa, none of the datasets really stood out.” Said Associate Research Scholar Hylke Beck, from Princeton University (USA).

The MSWEP dataset used by the researchers is unique in that it optimally merges a wide range of gauge-, satellite-, and model-based datasets in an effort to provide reliable precipitation estimates over the entire globe. It has a global coverage (including ocean areas) and a high 3-hourly temporal and 0.1° spatial resolution. The dataset spans the period 1979–2016, and corrects for gauge-undercatch and orographic effects by inferring the “true” long-term precipitation using streamflow observations from ~14,000 catchments worldwide. Last but not least, the dataset applies daily (rather than monthly) gauge corrections, and accounts for the reporting times of gauges when applying the corrections (see this tweet for a global map of reporting times).

When confronted on how MSWEP compares to the Australian rainfall grids produced by the Bureau of Meteorology (BoM), Mr. Beck stated that while a quantitative comparison is still on the team’s “to-do” list, they suspect the datasets to perform similarly in densely gauged areas, given that they incorporate largely the same gauge observations. However, they expect MSWEP to perform better in poorly gauged areas, due to the use of satellite- and model-based data. A clear benefit of MSWEP is its 3-hourly resolution, which makes it more suitable for applications in highly dynamic environments, Mr. Beck said.