Rainfall observations are important inputs for hydrometeorological applications. However, preparing a spatially and temporally consistent rainfall dataset is still a challenge because of sparse point measurements. One potentially valuable source of rainfall data with consistent spatial and temporal resolutions is an atmospheric reanalysis. An atmospheric reanalysis combines weather model simulations with available observations to provide a physically consistent representation of the atmosphere over large spatial and temporal extents. The local observations and model states are combined using data assimilation, so that the resulting composite is optimal, including the key advantages of each input dataset. The first and only regional (12 km) reanalysis developed specifically for Australia is BARRA‑R (The Bureau of Meteorology Atmospheric high-resolution Regional Reanalysis for Australia).

In a recent paper published in Hydrology and Earth System Sciences journal, we undertook an evaluation of daily precipitation from BARRA‑R using a range of evaluation metrics to ascertain its efficacy for further hydrometeorological applications. The rainfall estimates in BARRA-R are area-averaged and therefore we benchmarked it against best available point (gauge) and areal precipitation, AWAP. We also compared the performance against global (approx. 80 km) reanalysis ERA-Interim which provides boundary conditions to drive BARRA-R. 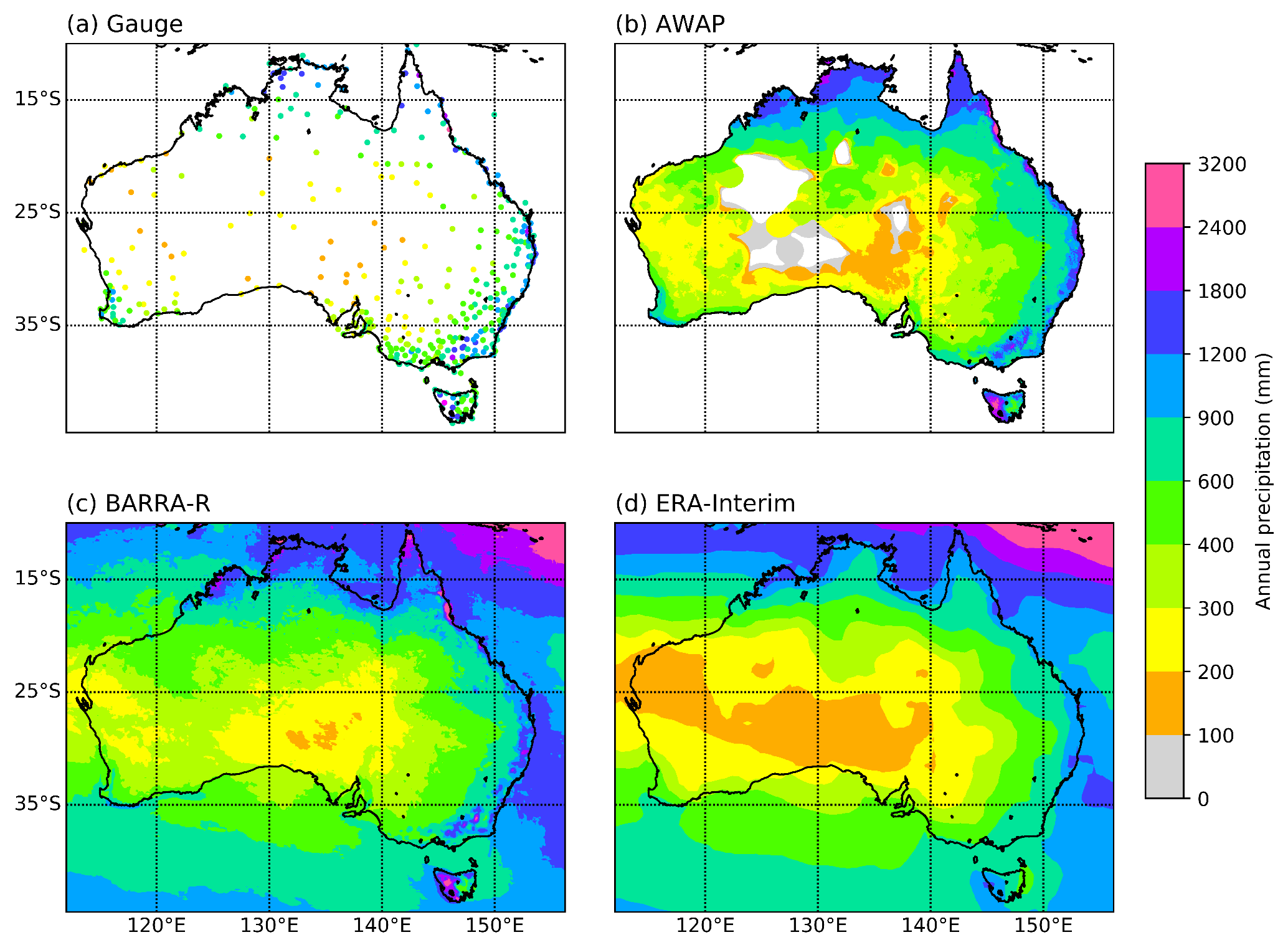 We found that BARRA-R is able to characterise a rich spatial rainfall variation across Australia. The added value of high-resolution regional reanalysis over coarser global reanalysis is displayed by an improved performance over ERA-Interim. We also found that BARRA-R reproduces unbiased estimates of extreme rainfall, outperforming the coarser global reanalysis. We observe that the frequency of rainy days is slightly overestimated by the gridded datasets, where the bias consistently increases with grid cell size of datasets. Dry-wet and wet-wet transition probabilities are also closely reproduced by the BARRA-R. We also found that model performance depends on location, where – as is generally the case for reanalysis data sets – the estimates were superior in the temperate region compared to the tropical regions. BARRA-R demonstrated markedly better performance when evaluated at the grid-scale (benchmarked against AWAP) than at point (benchmarked against gauges), suggesting that it represents areal rainfall rather than point rainfall.

The daily precipitation from BARRA-R is understandably poorer than the AWAP dataset, which is directly derived from gauge observations. Nevertheless, it provides a high-resolution precipitation pattern over the entire Oceania region. It also has the potential to provide valuable information on rainfall behaviour over the central Australian region where there is paucity of gauges. Overall, we find that BARRA-R is a useful complement to existing precipitation datasets for Australia, especially in the regions where direct measurement of precipitation is sparse or not available. We are continuing to explore the efficacy of this dataset at sub-daily time scales and are assessing its suitability for a range of engineering hydrology applications.